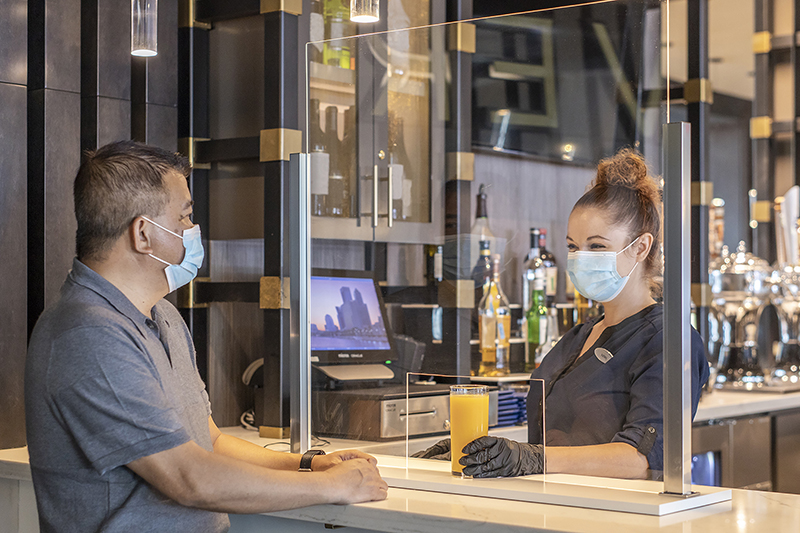 The group said that it expected to see a rising number of conversions compensate for a slowing in rooms growth.

The company said that, by managing costs, increasing productivity and having a lower mix of food-and-beverage revenues it had effectively reduced the break-even occupancy level of its full-service hotels by at least five percentage points around the world and in some cases more.

Mark Hoplamazian, president and CEO, told analysts: “Our colleagues are reimagining both the guest experience and the manner in which we operate hotels to optimize results even at significantly reduced levels of occupancy.”

Shifts in operations have included a reduction in staff numbers, with experienced staff offering more services, expansion of grab-and-go F&B concepts and new in-room experiences such as spa kits and mixology kits.

Joan Bottarini, CFO, said that the group was “prepared for an uneven recovery” and would continue to rework its operating model.

Looking to China, which accounted for around 10 percent of the group’s fees and 5 percent of earnings, Hoplamazian said: “Our [revenue per available room] index in the second quarter for full-service hotels in Greater China has reached levels about 15 points higher than 2019, indicating that we are significantly outperforming our competition through the early stages of this recovery.

“China serves as a great example that travel recovery is possible even without pharmaceutical treatments or a vaccine as long as proper, well-coordinated actions are taken to significantly reduce the spread of the virus.”

Greater China full-service open hotel occupancy levels started to rise off their lows during the first quarter to about 22 percent in April and have since climbed to approximately 55 percent in July.

Elsewhere in the world, the picture was mixed, with the rate of growth and demand moderating in the middle of July following the July 4th holiday due to the impact of rising case counts in certain areas and many cross-border travel restrictions that remained in place across the world.

Occupancy levels for open full-service and select-service hotels in the Americas ranged from a low of approximately 6 percent and 15 percent respectively in April to approximately 21 percent and 43 percent for July.

Adjusted earnings before interest, taxes, depreciation and amortization for the quarter was negative $117 million, with a reported systemwide revenue per available room decline of approximately 89 percent in constant dollars. As of June 30, Hyatt’s total liquidity inclusive of cash and equivalence combined with borrowing capacity was almost $3 billion, which it said would allow it to operate at second quarter 2020 demand levels for an additional 36 months.

The group said that it expected net room growth to be more in the range of 4 percent to 4.5 percent this year, as opposed to the original guidance of 6.5 percent to 7 percent. Hoplamazian said that the group was seeing consecution delays and “isolated terminations” but that “helping to offset some of that be additional conversion opportunities that we’re pursuing; some of which we expect to realize prior to the end of the year.”

The CEO said that he expected to see solid progress on full-service development around the world with particular strength in the Asia-Pacific segment. Select-service production in the U.S. had slowed due to constraints on financing, but that, in the long term, he expected “significant opportunities for global growth” of the select service brands given Hyatt’s “relatively modest market penetration across the globe.”

He concluded: “The second quarter was challenging but in line with what we expected. We do believe the worst is behind us and we’re seeing positive signs developing around the world with some clear pockets of strength.”

Most foodborne illness happens because TCS food has been time-temperature abused. Post Views: 3