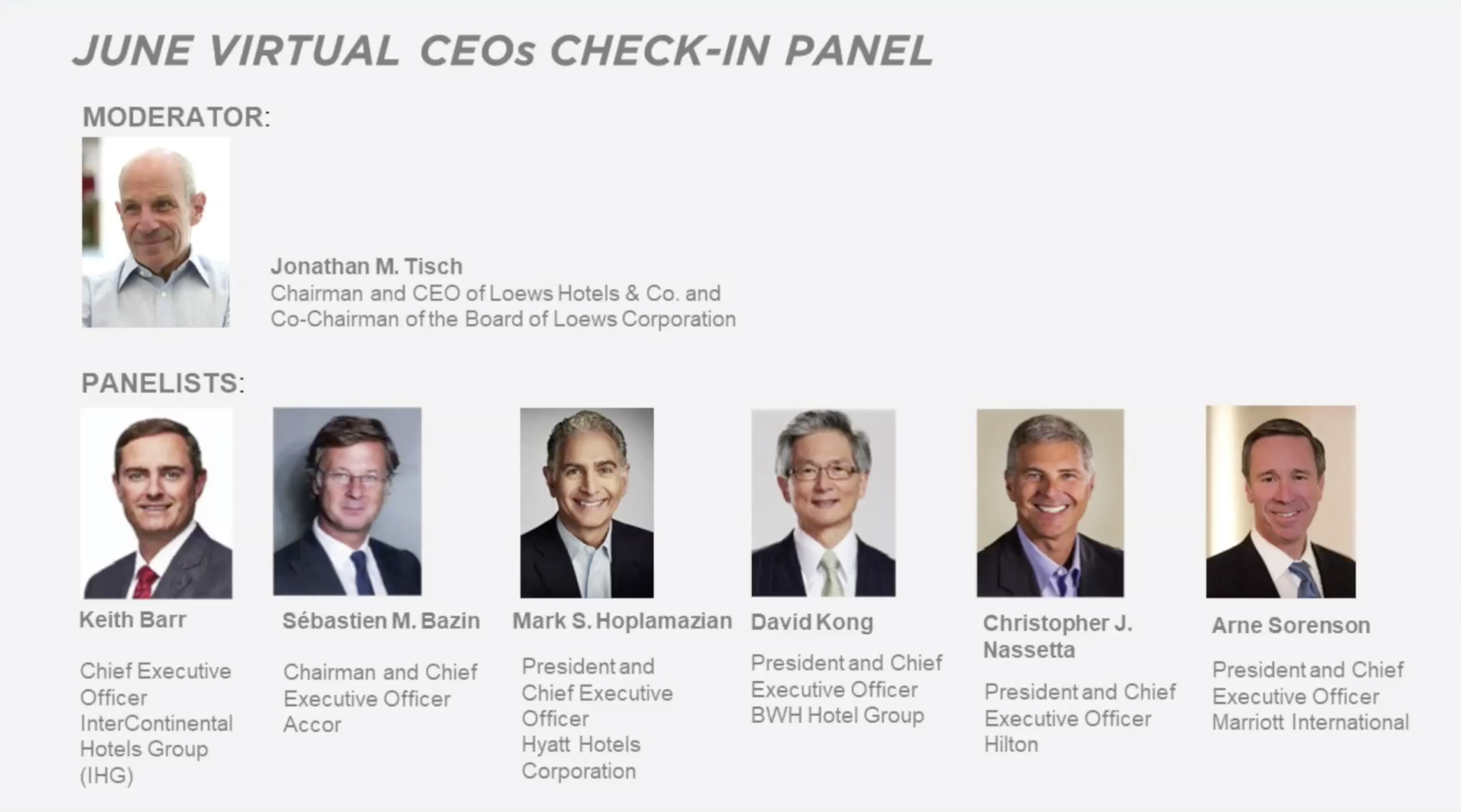 Under normal circumstances, the 42nd annual NYU International Hospitality Industry Investment Conference would have taken place this week at the New York Marriott Marquis. Instead, as with so many other major conventions and gatherings, the event has been postponed, until November. In its place, Jonathan Tisch, chairman and CEO of Loews Hotels & Co. and honorary chairman of the advisory board of the NYU Jonathan M. Tisch Center for Hospitality, moderated the Virtual CEOs Check-in Panel, discussing the present and future of hospitality in a time of chaos.

“From a business perspective, this is unlike anything we’ve ever experienced,” Tisch said in his opening remarks, citing 9/11 and the global financial crisis as other forces that have challenged the industry in past decades. “The global scale and the impact of this is much greater than anything our industry—or any of us—have ever experienced. Projections are that 2020 will be the worst year on record for the travel and tourism industry. According to Oxford Economics, our industry will suffer $510 billion in total losses by the end of the year. Travel-related unemployment is now at some 51 percent, more than double the worst national unemployment rate recorded during the Great Depression. Eight million men and women in our industry have lost their travel-related jobs. Travel spending is at 88 percent below last year’s level, and air travel is down 95 percent. The lodging sector is on pace to lose $500 million in room revenue per day. And as of the end of last month, seven in 10 hotel rooms were sitting empty [and] 70 percent of hotel employees have been laid off.”

Industry experts, he added, estimate that hotels may not return to their 2019 occupancy and revenue levels until at least 2022.

With those numbers in mind, optimism may seem challenging—but the CEOs on the panel expressed hope for the future. “Be present. Be humble,” advised Sébastien Bazin, chairman and CEO of Accor. “Don’t look to the next 12 to 18 months, but look for the next two, three, four weeks, to make sure you have the liquidity and make sure everybody’s safe.”

Hilton President and CEO Christopher J. Nassetta encouraged his fellow leaders to keep a steady hand on the proverbial wheel. “All of us, as leaders, have a lot of people looking to us, whether that’s our family, our children, our loved ones, friends [or] the hundreds of thousands of people that wake up every day that work in these fine companies of ours,” he said. “And what they need to have is hope. They need to have a light at the end of the tunnel and it’s our jobs to give them that.”

“It’s a little bit like Henry V and the Battle of Agincourt,” quipped Marriott International President and CEO Arne Sorenson. “This is one of those events that everybody in the industry will look back on and say, ‘Where were you on St. Crispin’s day? Where were you during COVID-19?’” At the same time, he insisted the hospitality industry needs support from governments if the industry is to continue being a financial leader for a wide range of markets. “We need you to step in to help our hotel owners, most of whom are small businesses, navigate from where we are until [we reach] a hopeful place where we can be going forward,” he said.

The Other Side of the V

After months of closed and barely open hotels, said David Kong, president and CEO of Best Western Hotels & Resorts, said Memorial Day weekend revealed “tremendous pent-up demand for the leisure segment,” and a member of Best Western’s board of directors who owns a seaside hotel in Oregon reopened to 100 percent occupancy for the holiday weekend. “That’s higher than the previous year,” Kong said. “Demand is going to be dominated by road trips. People prefer to drive in the safety of their cars than fly.” Drive-to destinations like beaches and parks, he added, will get the lion’s share of that demand.

Mark S. Hoplamazian, president and CEO of Hyatt Hotels Corp., noted that the top source market for Hyatt’s Arizona hotels over the Memorial Day weekend was Texas. In other words, he said, they aren’t just driving to their destinations, “they’re prepared to drive some distance to get out and have a different kind of experience.”

The trend was not limited to America, said IHG CEO Keith Barr. One of the company’s Six Senses resorts in Vietnam is operating at 80 percent occupancy, all with domestic guests, he said. Overall, he sees confidence in the long-term prospects of the travel and hospitality industries. “I don’t know what the trajectory is going to look like, but the business will rebuild over time and we will definitely see people return to travel,” he said. “We’re learning how to operate in this environment; we’re learning how to make customers feel safe. And that’s what we have to do as an industry: All of us have to work together.”

Nassetta said his company’s hotels had doubled their overall occupancy from the nadir of the downturn. “Sadly, that’s still not a very high level of occupancy,” he acknowledged. “I think we bottomed out at about 13 percent and we’re [now] running 25 to 30 percent.”

By the middle of June, said Bazin, Europe’s entire Schengen zone will reopen, which he expects will help boost occupancy across the region. “It’s time for resetting your own organization,” he said of the weeks and months before the numbers start to tick back up. “It’s time to rethink what is it that should have been working better, how should you be reorganizing.” For large companies like the ones on the panel, he said, the local management teams should be trusted to make the best decisions for the bottom line of the properties and the safety of guests and staff. “They know better,” he said of the local teams. “They know their market better, they know the owners better, they know their clients better. So it’s really a time to be bottom-up as opposed to top-down organization. That’s a major reset [and] not easy to do, but just trust them fully all the way, because they’ve been there at the time you needed them the most.”

Talking about the past weeks, #BazinSays it is really a question to learn as much as you can. Care for your employees, care for your owners & spend as much time as you can answering questions they may have, even though you may not have all answers. Provide them with direction.

Sorenson noted the “conservative nature of big institutions” that drives leaders to see who can be most conscientious for their folks—“all of which is good,” he added. “I don’t think any of us would advocate that these corporates should put their people into harm’s way and make them take risky vacations, or risky business travel.” Instead, he said, hotel leaders like himself and the other CEOs on the panel would need to pay attention to their associates, their owners and to the data. “It is about being transparent,” he said, “transparent being a fancy word for telling the truth.”

While the industry waits for hotels to reopen, they are also waiting to bring furloughed and laid-off hotel employees back online. This, of course, may well mean a lack of new jobs in the industry for some time. “Be patient,” Sorenson advised aspiring hoteliers. “It’s not going to be simple. I think in the next 12 to 24 months, we’re going to watch this business build back and as it builds back we’ll find those opportunities to come. I’d love it if they were patient and would hang with us because this is an industry which will make your life that much richer in so many different respects.”

As aspiring hoteliers wait to rise up in the industry, Hoplamazian suggested, they should apply a growth mindset and imagine a range of possibilities rather than limiting their ideas to what the industry was like a year ago. “There are many paths to a future in hospitality,” he said. “Being able to maintain a more open mind about how to gain experience that will be applicable into the future is probably a constructive and productive way [to grow.]”

“Up until 90 days ago I think I heard every single member of this panel, one way or another, utter a few thousand times, ‘We are in a golden age of travel,’ which I think we all believed,” Nassetta said. While optimism may be hard to come by now, he acknowledged, he doesn’t think that golden age has ended. “I think we will be in a golden age of travel. I think hospitality, people’s desire to travel [and] experience things—whether it’s business or leisure and congregate for groups—is unstoppable. We will figure this COVID thing out.”