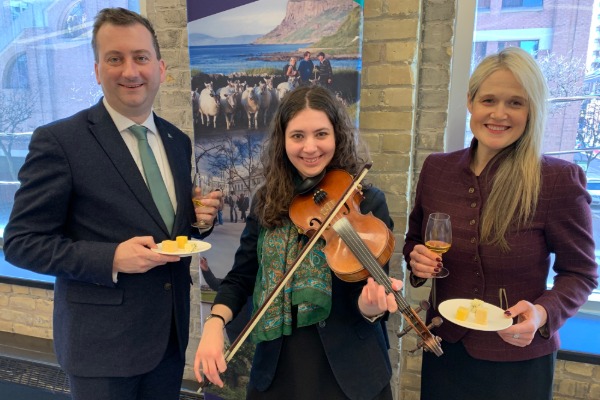 Irish whiskey, paired with Irish cheeses and chocolate, topped the menu yesterday (March 5) at The Chefs’ House in Toronto as Tourism Ireland partnered with the Irish Whiskey Association for an exclusive trade event.

Ireland is the home of whiskey and in the 19th century was the global powerhouse of whiskey production. But, this all fell apart in the 20th century and by 1980 there were only two working distilleries left on the island. Today, there are 31 distilleries, 17 of which offer special visitor experiences.

William Lavelle, of the Irish Whiskey Association, told PressToday that global sales of Irish whiskey have doubled in the past 10 years, and that sales in Canada are booming.

“Ireland is well known for its landscapes and heritage, but in the last few year there’s much more appreciation for food and drink,” he said.

Visitor experiences at the distilleries, which are located all across Ireland, include tours, tastings and even classes.

Represented at the Toronto event were Bushmills, Jameson and Teeling (Dublin’s first new distillery in more than 125 years).

Dana Welch, manager, Tourism Ireland, Canada, commented, “We’re delighted to be partnering with Drinks Ireland / Irish Whiskey to highlight some of the whiskey products that Ireland has to offer, pair them with unexpected food pairings, such as Kerry Gold cheese and Irish chocolate, and to promote the opportunity to continue the experience by visiting one of Ireland’s many distilleries. Food and drink are vital elements of today’s holiday experience and a major contributor to increasing holiday satisfaction.”

Welch noted that access to the Emerald Isle from Canada continues to be strong with year-round service available from Air Canada and Aer Lingus, as well as seasonal service from WestJet and Transat.

Pictured at the event with a traditional Irish musician are Lavelle and Welch.