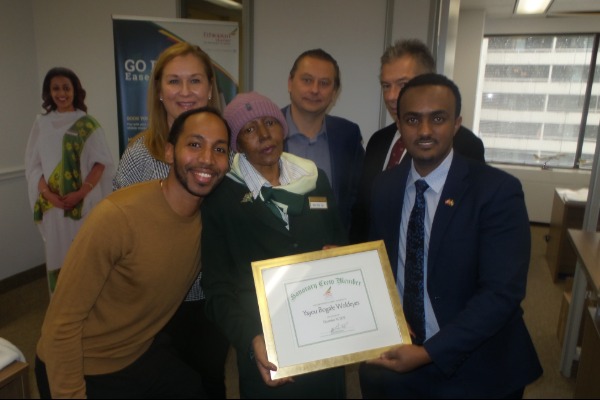 Ethiopian Airlines puts people in Cloud Nine on a daily basis and put Yayou Woldeyes on cloud nine on the eve of Christmas.

The carrier, which offers those travelling between Toronto and Addis Ababa a choice between Economy seating and its Cloud Nine business class, surprised Toronto resident Woldeyes at its Toronto office yesterday (Dec. 19) when it made the Addis Ababa-born woman an honorary inflight crew member, fulfilling her childhood dream of being an airline employee.

The 53-year-old Woldeyes – who relocated to Toronto in the 1980s – has pancreatic cancer and is in palliative care, prompting her son Ermias to contact Ethiopian Airlines and ask if it would allow her to don a flight attendant’s uniform. Woldeyes grew up wanting to be a flight attendant, applying for one of the positions in the late 1970s, and dismissing a childhood friend’s suggestion that she become a nurse.

“Growing up, my mom has always told me the story of how she admired Ethiopian Airlines staff and always dreamed of being a member of its cabin crew,” Ermias says. “She would talk about how much she loved the uniform that flight attendants wore.”

Ermias’ request was okayed by the carrier’s Canadian manager Samson Arega, and Ermias brought his unsuspecting mother to the airline’s Toronto office on Dec. 19, telling her she needed to sign documentation in preparation for a visit by her brother in Sweden. Woldeyes arrived to a surprise gathering where she was presented with a flight attendant’s uniform and name tag, a plaque recognizing her as an honorary staffer and a bouquet.

“Now you’re a part of the team,” Arega told Woldeyes, who acknowledged her surprise but declared herself “very, very happy” and proceeded to hug all Ethiopian Airlines employees and others looking on.

Arega said his employer has a strong sense of social responsibility, prompting it to agree to Ermias’ request. “We wanted to fulfill her dreams.”

“Any more gifts and you’ll need two Ubers to get home,” he joked.

“She can’t stop talking about it on phone with family now – that this is the best Christmas surprise gift she’s ever had. She was in shock at the Ethiopian Airlines office and thought she was dreaming after putting on the official uniform. As her cancer is not curable, she is in palliative care with hopes to enjoy her remaining time as much as possible with family and friends, but she struggles at times to maintain her optimism. Today, Ethiopian Airlines granted her dreams, and celebrated it with her too. She not only feels a greater sense of community now, but also has a fresh outlook towards a new year full of joy and possibilities.”

Pictured with Woldeyes (who’s seated and holding her plaque) are Ermias; Gordana Mosher and Ed Radonic of RadonicRodgersStrategy; and Ethiopian Airlines Dave Timmins and Arega.