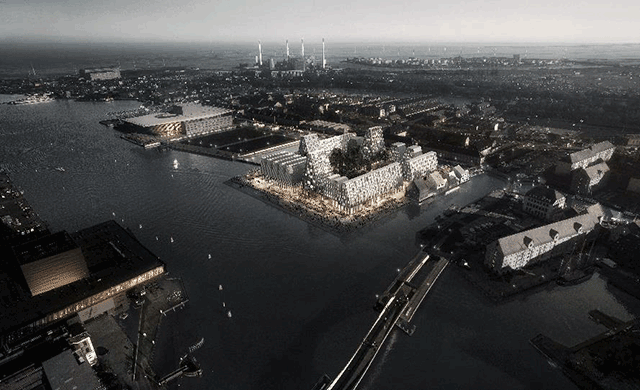 The 25hours Hotel Co. is opening a second hotel in Copenhagen. The new 25hours Hotel Paper Island is scheduled to open in early 2024.

“The only thing better than one hotel opening in a new city is two openings,” said 25Hotels Chief Development Officer Florian Kollenz. “We’re very proud to be working on the new hotel project with CØ P/S, a consortium consisting of pension fund Danica and project developers Nordkranen and Union Kul.”

The new 128-room 25hours Hotel Paper Island will be located in the city center island of Christiansholm, also known as Paper Island, because of the giant rolls of paper that were stored there for Danish newspapers. The Opera House and theater are located nearby and the area will get a new public park and promenade encircling the entire island next to the hotel.

Public spaces at the hotel will include a restaurant and a cafe on the ground floor as well as a rooftop bar. Two houseboats are parked in front of the hotel, and 25Hours Managing Director Michael End said the team is “evaluating various concepts, including a sauna and bar” for the boats.

Following the announcement of the city’s first property to fly the flag earlier this year, the company has also announced three restaurants for the upcoming 25Hours Hotel Copenhagen, due to open in 2021.

Italian pastry chef Melissa Forti will develop the Duse Café, the Molcho family will open the seventh Neni restaurant at the hotel while Jörg Meyer will oversee the fourth Boileroom. All of these restaurants and bars will be Scandinavian debuts.