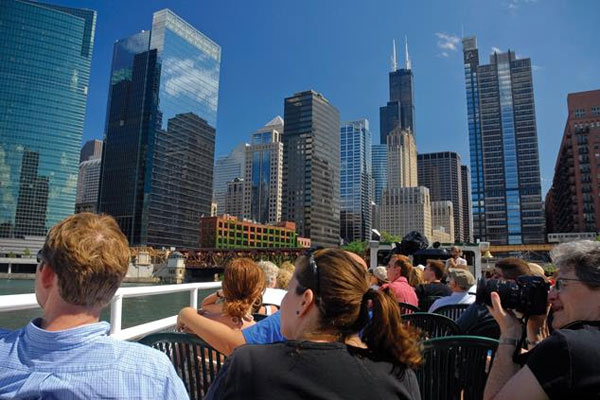 And that’s just a small slice of the international picture. Chicago also realized growth in nine of its 11 priority markets, welcoming 2.2 million international visitors, an increase of 4.9% over the previous year. Canada was Chicago’s third fastest growing international market in 2018, followed only by the United Kingdom (15.2%) and India (8.9%).

In 2018, Chicago welcomed 58.3 million visitors overall, an increase of 3.1 million visitors from 2017. Of those, 33 million spent at least one night in the city. The significant increase in travellers, both domestic and international, has translated into a 4.4% increase in hotel room occupancy to a total of 11.8 million rooms. Choose Chicago says the record-breaking tourism is a result of the city’s continued focus on growing its international overnight and leisure visitors who typically stay for longer periods and spend more during their visit.

“We are delighted to see overall growth in nine of our top 11 international arrival markets including Canada,” said David Whitaker, president & CEO of Choose Chicago. “The rate of growth outpaced many other popular US destinations signalling Chicago’s emerging role as an international visitor hotspot. As international travellers are looking for new and undiscovered places to explore and play, Chicago’s diversity of experiences is unmatched other than the diversity of travellers who are now visiting here.”

Choose Chicago also points to special events and programming such as the James Beard Awards, the Laver Cup and the 2018 Year of Chicago Theatre (which saw record breaking ticket sales) as contributing to the city’s draw and resulting visitation growth. In recent years, the city has also focused on growing its meetings and events market and increasing its world-class hotel offerings. Eight new hotels opened in 2018, including The Gwen Chicago, Hotel Julian, Hilton Triplex, Moxy Chicago and Zachary Hotel. Most recently, the city welcomed The Hoxton and in 2020, Nobu Hotel will open.