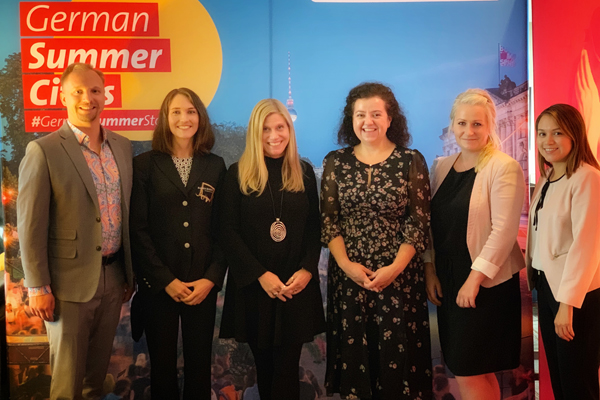 Coming off of its 9th record consecutive year for incoming tourism growth, travel to Germany is continuing on a positive trajectory.

“We had an amazing 87.7 million overnights into Germany which resulted in an increase of 4.5%,” said Julia Dywelski, director, German National Tourist Office, at a Toronto event yesterday (Sept. 16). “We are also looking at a slight increase for 2019, but also a bit of hesitation with situations in Europe currently, in forecasting a growth rate similar to the one in 2018.”

The Canadian market contributed to the growth with about 700,000 overnights in 2018.

“2019 is looking not too shabby for us because we have an increase of 7.2% already with January to June and the strong Christmas market season is still ahead of us,” she said.

Some of the major highlights for Destination Germany this year includes 100 years of the Bauhaus the architecture movement and the 30th anniversary of the fall of the Berlin Wall on Nov. 9.

“The fall of the Wall and German reunification the year after have been one of the strongest drivers of growth for inbound tourism in German history,” she said. “Between 1993 and 2018 the number of overnight stays by international visitors to Germany as a whole more than doubled from 34.7 million to 87.7 million.”

Looking ahead to 2020, highlights will commemorate the 250th anniversary of the birth of Beethoven and the 42nd Oberammergau Passion Play.

“Beethoven is the most frequently performed of all classical composers. He was also a radical artist who constantly reinvented himself,” she said. “Nearly 400 years ago the history of the Passion Play began. The plague raged in many parts of Europe and didn’t spare Oberammergau either. Oberammergau is a very picturesque town in Bavaria. In 1633 the Oberammergau villagers promised to perform the suffering, death and resurrection of Christ every 10th year in so far that no one is to die of the plague anymore… the promise has been kept until today.” 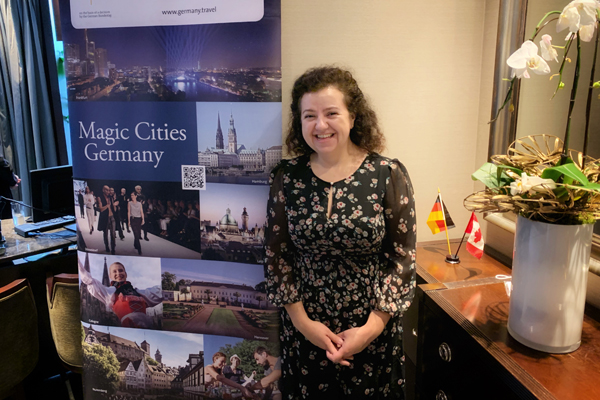 There are lots of reasons to visit Germany!

Representatives from across Germany were also on hand to share the latest news and reasons to visit the European destination.

Jasmin Bischoff, director of tourism marketing for the Frankfurt Tourist and Congress Board, highlighted the new Frankfurt Old Town as a reason to visit.

The reconstructed old town, which had been destroyed in WW2, was completed in May 2018 based on original building plans.

“It’s a really lively district,” she said, noting the area between Römer City Hall and Emperors’ Cathedral is now filled with offices, cafes and restaurants.

Germany’s major airport hub with non-stop flights to major cities in Canada is the third most popular city for Canadians to visit following Berlin and Munich. Frankfurt is also famous for its apple wine, Christmas market and will soon be home to the MOMEM, the Museum Of Modern Electronic Music, as the birthplace of techno music.

Kristin Barth, project manager tourism for Saxony-Anhalt, pointed out the state is home to Dessau, which was key to the Bauhaus movement.

The destination is home to UNESCO World Heritage Sites, including The Garden Kingdom of Dessau-Wörlitz, Quedlinburg’s Old Town, The Luther Sites in Wittenberg and Eisleben, and The Bauhaus in Dessau. On Sept. 8, the new Bauhaus Museum opened in Dessau.

Bill Clinton once described Baden-Baden as “so nice that you have to name it twice.”

Taking its name from the German word for bathing, Baden-Baden is known for its spa culture. With a location between Frankfurt and Basel, Wiebke Freund head of international sales and marketing for Baden-Baden Tourism Board said it’s an excellent option for pre or post river cruise extensions.

Canadian visits to the city, which is now attracting a younger demographic, increased a whopping 29% in 2018. Freund noted that its Christmas market is longer than all the others, running from Nov. 28 to Jan. 6.

For those looking to put together a wine vacation, Jörg Hentschel of the Tourist Board of Franconia said the region is loaded with 250 suppliers that can easily be put together for FIT packages ranging from modern to traditional wine estates.

The charming city of Nuremberg, which is over 950 years old, is a popular choice for travellers, but Franconia is also home to UNESCO sites like the town of Bamberg, the Margravial Opera House in Bayreuth and the Würzburg Residence with the Court Gardens and Residence Square. Franconia also holds claim to having the highest density of breweries with over 300 breweries.

Bavaria is home to many iconic sites like Neuschwanstein Castle and the annual Oktoberfest celebrations. For clients looking for an alternate experience, Diana González, marketing manager, North America, for the Bayern Tourismus Marketing GmbH, suggested the Kocherlball. The open-air dance festival stems back to a time where cooks and workers partied while their masters were at church: so the celebrations start at 6:00 a.m.

Embracing its traditions, Bavaria has partnered with local ambassadors to share their stories about their way of life in promotional materials.