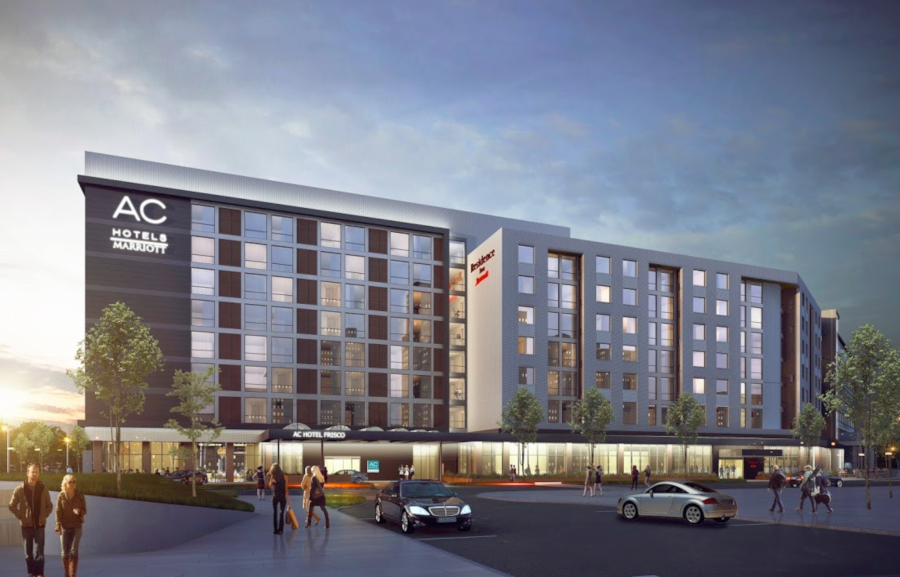 As unrelated factors and delays pushed around opening dates, NewcrestImage found itself opening three hotels, all years in the making, within days of each other this summer. The properties—a dual-brand AC Hotel by Marriott/Residence Inn by Marriott in Frisco, Texas, and an adaptive reuse AC Hotel by Marriott in Houston—are two types of construction projects NewcrestImage has accumulated a significant amount of experience in.

The company, now with 28 owned and managed hotels across 10 states, has worked on nine historical projects to date. Mehul Patel, chairman/CEO of NewcrestImage, said he’s found brands like historical properties and by renovating historic buildings, developers can bring new life to it and the neighborhood.

Hospitality professionals turn to Hotel Design as their go-to news source for the latest products, projects, and trends for hotel interior designers and architects. Sign up today to get news and updates delivered to your inbox and read on the go.

Now, as the 195-room AC Hotel by Marriott Houston Downtown, the historic building houses a cocktail lounge, 4,000 square feet of meeting and ballroom space, a fitness center and a business center. Those who are fans of silent movies will be able to dine in the former Zoe Theatre, which also originally opened in 1914, on the building’s ground floor.

“Everyone was committed to properly balancing preservation and renovation, in look and in function,” said Patel. “The end result blends yesterday’s glamour with today’s needs.”

NewcrestImage is taking its extensive history developing dual-brand properties to the next level. The new dual-brand hotel it opened in Frisco—the AC Hotel by Marriott/Residence Inn by Marriott Dallas Frisco—is actually the first part of a planned four-brand property.

The project will encompass 600 rooms and four brands, with 150 guestrooms per brand. In addition to the AC Hotel and Residence Inn, which share a building, NewcrestImage is planning on opening a Canopy by Hilton in late 2019 and expects to begin construction on a Hyatt Place in 2020.

NewcrestImage has two similar “hotel campus” projects elsewhere in Texas, one in Grapevine and another in Amarillo. Hotels on these campuses mix brand companies and are generally spaced 50 to 100 feet apart.

In Grapevine, near Dallas/Fort Worth International Airport, the company plans to open four new hotels close to a dual-brand property it has operated since 2013. In total, that development is expected to include six hotels, around 1,000 rooms and 50,000 square feet of meeting space. In Amarillo, NewcrestImage is in the middle of opening and developing a five-acre campus consisting of three hotels. The first of those three, a 94-room Tru by Hilton, opened last August, while the other two, a 90-room Hyatt Place and a 90-room Aloft, are currently in development.

“Once our company determines that we want to be in a particular city or neighborhood, we like to focus on moving ahead with the project rather than spending effort and energy to find additional sites,” said Patel. “The “hotel campus” is a style we like very much and are very comfortable with.”

Since the building that houses the AC Hotel by Marriott Houston Downtown originally was built to be used for office space, Patel said adapting the property required many logistical changes. Interior corridors were too small and had to be widened. Entry doors to guestrooms had to be added in every few feet. Since hotels require significantly more bathrooms than an office, more extensive plumping had to be installed. Much thicker utility lines had to be introduced to accommodate the higher utility load a hotel creates. Since hotels create a higher weight load, the slab had to become much thicker. On top of all those logistical issues, Patel said the property had not been renovated recently.

Having the best team working on the project is the key, said Patel. The company, he said, was able to utilize knowledge it has accumulated from its past projects to help solve the problems it faced on these three hotels. “We like the challenge and in most cases it allows us to create something unique for our guests,” he added.

Since the AC Hotel by Marriott Houston Downtown’s building is listed on the National Register of Historic Places, NewcrestImage had to get certain changes approved by various government agencies.

“When we propose these type[s] of changes as part of a historic renovation, we must work very closely with the appropriate federal and state agencies,” explained Patel. The company, he said, worked with both the Texas Historical Commission and the National Park Service as it went, finding ways to preserve the building’s historic elements and gaining approval when it wanted to introduce something more modern. “There was a lot of explaining and discussing and negotiating—all very productive, but time-consuming,” said Patel.

As rising labor costs continue to eat into hotel profits, finding ways to save money wherever possible is more important than ever.

By developing multiple brands within walking distance of each other, Patel said the company has been able to better control labor costs during construction. “Plus, having multiple properties adjacent to each other enables us to achieve valuable efficiencies in maximizing rates and in minimizing management costs,” said Patel. One more added benefit: a multibrand property can offer guests more options, allowing the hotel to attract a wider range of travelers.