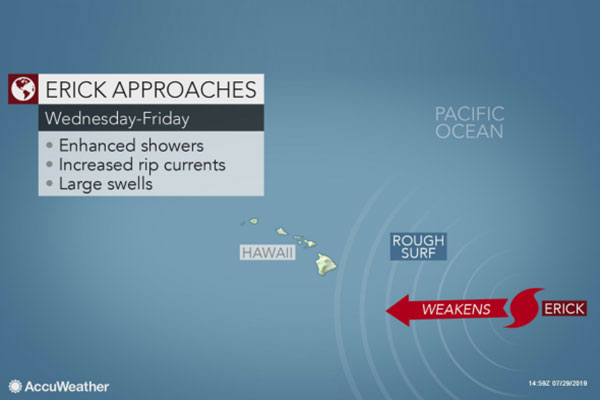 Major Hurricane Erick and Tropical Storm Flossie will pose a dual threat to Hawaii in the next few days and continuing into early next week, according to AccuWeather Global Weather experts.

As of yesterday, Erick became the season’s second major hurricane with maximum sustained winds near 115 mph.

As Erick continues westward through midweek, it will remain in an environment with very warm water and weak wind shear, two factors conducive for further strengthening.

Erick will encounter much stronger wind shear by the time it passes just south of the Big Island from Friday into Saturday.

It is during this time that Erick is expected to lose wind intensity, and Erick is likely to be a tropical storm or tropical depression during its closest pass to the Hawaiian Islands.

“As Erick passes to the south of Hawaii, rough surf and increased rip currents will impact the Big Island,” according to AccuWeather senior meteorologist Carl Erickson.

Large swells will also batter the east-facing beaches of the Big Island beginning at midweek and continuing through the start of the weekend.

In addition, Erick will also infuse tropical moisture into the Big Island, resulting in enhanced showers and thunderstorms that could trigger incidents of flash and urban flooding.

While the heaviest rain is expected to remain in the windward areas of the Big Island, heavy showers are likely to spill over onto the western side of the Big Island as well. These areas do not typically receive rain in the absence of a tropical system.

If Erick tracks farther north than currently anticipated, then the Big Island may receive even heavier rain and the addition of gusty winds that could bring down trees and power lines. Maui and Lanai could also experience some showers and rough surf.