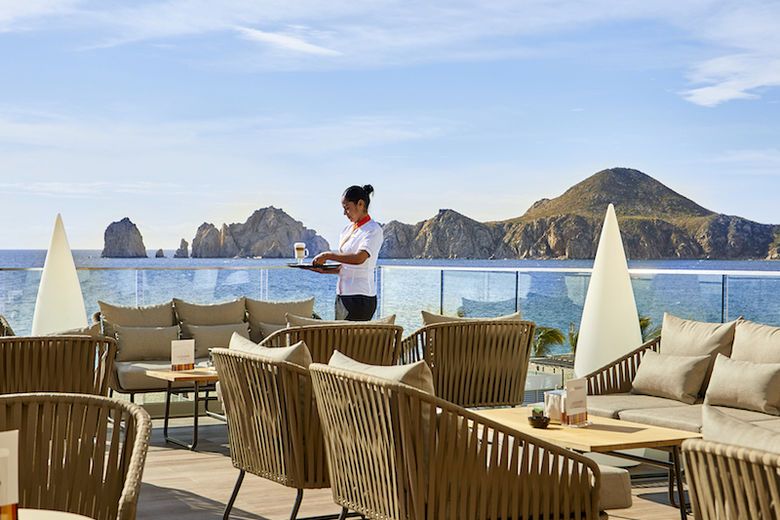 RIU Hotels & Resorts has recently opened the Riu Palace Baja California, its third hotel in Los Cabos and its twentieth in Mexico. The hotel offers an all-inclusive service and 24-hour room service. It is also the chain’s first Adults Only hotel in Los Cabos. With the new hotel, RIU is taking another step forward in the innovative architecture of its hotels by changing the structure of the spaces, bars and restaurants. This lets views of the sea take centre stage, as requested by RIU’s most loyal customers.

Riu Palace Baja California, like the newly-opened Riu Palace Costa Mujeres hotel, represents a 180º turnaround in the usual layout of RIU hotels. In both cases, the communal areas, restaurants and daytime bars have been raised a level and positioned overlooking the sea to offer guests a continuous view of, in this case, the magnificent Pacific Ocean. In addition, a total of 32 rooms have been elevated, which means that this is one of the hotels with the greatest number of rooms with full sea views (a total of 82). This design has created a raised bridge that covers the plaza and offers a seafront façade with a striking entrance that emphasises the hotel’s elegant and pioneering design. A tiered water feature with infinity pools has also been built, offering a continuous view of the water as it blends into the ocean at the horizon.

The newly-built construction offers free parking for guests, modern facilities and sophisticated décor, in line with the Riu Palace brand by RIU. Luxury hotels designed to be enjoyed in relaxation. Riu Palace Baja California has 602 comfortable and elegant rooms characterised by pale hues and wood, which offer free WiFi, air conditioning, a complete spirits dispenser and a minibar.

Adults Only means that the facilities, as well as the little luxuries and amenities, are all designed for couples. Great care is taken over every detail so that guests can enjoy a relaxing holiday, including a welcome cava cocktail, bathrobes in the bedrooms and the option to book a romantic, candlelit dinner on the beach.

The hotel is perfectly equipped for guests who want to relax, thanks to the Renova Spa that offers multiple beauty treatments and massages. In addition, if you wish to hold events or meetings, Riu Palace Baja California has two fully-equipped conference rooms.

The hotel is located in El Médano, along with RIU’s two other hotels in Baja California: hotel Riu Palace Cabo San Lucas and hotel Riu Santa Fe. The latter is famous for the pool parties that the company has recently started holding and which guests staying at Riu Palace Baja California can attend for free. Guests of the new hotel can also dance the night away at Pachá nightclub or have fun at Splash Water World, both of which can be found at hotel Riu Santa Fe and which Riu Palace Baja California guests can visit for free and continue to enjoy the all-inclusive service.

Riu Palace Baja California has an enchanting location, which allows guests to enjoy wonderful natural beauty spots, like El Arco, a famous rock formation that is considered an icon of the region. It also has an incredibly rich fauna where you can see many different species, including humpback and grey whales in their migration season.

The RIU Group has an ambitious expansion plan for the next five years, with a strong commitment to new destinations, especially in Asia and Africa, and large global cities where it plans to open Riu Plaza urban hotels. The hotel chain, which goes back more than 65 years, is characterised by its strong commitment to the destinations where it settles, investing in long-term projects that involve the local community through its purchasing, employment and sustainability policies. RIU is also making a big investment in the development and improvement of an increasingly sustainable operation, and all of its projects are guided by respect for the environments and the local culture and environment.